Thanksgiving marks the beginning of the holiday season. It’s a joyous and special time with family and friends. Holiday season is also about food, shopping, beautiful Christmas decorations and fun activities. One of my favorite things to do during this season is check out the fun activities within the city and in nearby cities. One of my new favorites is the Festival of Lights in Downtown Riverside (Riverside, CA). Riverside is about 98 miles north of San Diego, an hour and a half  drive without traffic. This year marks the 22nd Festival of Lights and it is held annually at the Mission Inn Hotel & Spa. The event runs for  five weeks and it’s absolutely free. My better half and I really enjoyed the dazzling display of lights on our experience at the Festival of Lights two years ago. The “Switch-On Ceremony” will be tonight and it’s going to be our second time there. I am looking forward to it as we didn’t get to see as much the last time we were there because they were about to close. I also heard that they are going to have their very first outdoor ice skating rink and it will be the first in the Inland Empire! How exciting is that! Even better if I know how to ice skate! 😀 I still do it anyway. I usually just hold on to the board (rail) with my Kung Fu grip and I manage to survive. Hahahaha! 😀 Hmmm…maybe I should add “learning how to ice skate” in my bucket list before the year ends. What do you think? 😉

Aside from the display of lights, there’s also food, shopping and entertainment. Speaking of food, one of the favorite’s in the area is Casey’s Cupcakes. It is owned by Casey Reinhardt, the 2011 winner of Food Network’s Cupcake Wars. If you like pink and girly, you’ll definitely love her store! I thought it was really cute. 😀 In regards to how the cupcake tastes, we tried their popular red velvet cupcake and I think it’s okay. Some might have a different opinion about it but as my hubby said, my red velvet and green tea cupcakes taste way better. Awww…so sweet! He got handsome points for that! Hahahaha! 😀

If you’re visiting Southern California this holidays I highly recommend stopping by at the Mission Inn & Spa to see the beautiful display of lights. I promise, you’ll be glad you did! 😉 In addition to that, the hotel is so rich in history and it is actually a historical landmark. So it is definitely worth the visit! 😉

Here’s a preview for you. 😀

My copilot in my travel adventures and my journey through life! ❤ 😀 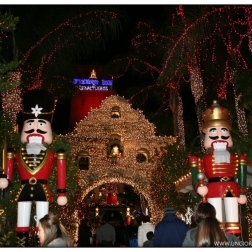 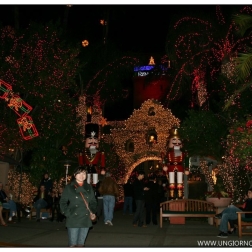 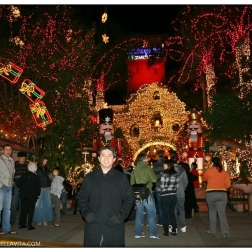 Just moi posing again because that’s what tourists do! Hehehehe! 😀 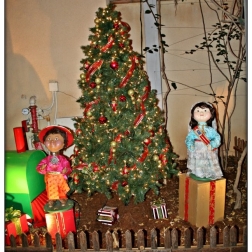 THE MILLER FAMILY BELL COLLECTION Frank Miller (the Master of the Inn in the 1890’s) traveled extensively throughout Europe and Asia on family vacations. He would always return with more “stuff” than he went with. Frank Miller Whether it was antique furniture, paintings, statuary, or a bell, Frank could never resist a great bargain. The Miller family bell collection once exceeded 800 and today, includes 400 bells that can be found throughout the exquisite grounds of The Mission Inn. The Nanking temple bell nicely adorns the Cantina section of the hotel’s Mexican restaurant, Las Campanas. This bell was one of the first items to leave China after the Boxer Rebellion in 1912 and was once coveted by Louis Comfort Tiffany who wrote a blank check in an attempt to purchase this bell, in which Mr. Miller ultimately declined. Another prized bell in the Miller family collection, the oldest dated bell in Christendom, A.D. 1247, is now being showcased right outside the Mission Inn Restaurant in 54˚ at Duane’s. On a trip to England, Mr. Miller purchased this bell and two others for around twenty-five dollars. When Mr. Miller returned to pick up the bells that he’d purchased, the shopkeeper only brought out two. The shopkeeper realized his mistake and told Frank that the third bell was no longer for sale. Frank objected, produced a written receipt of purchase and proudly returned to the Mission Inn with the oldest dated bell in the world. (http://www.missioninn.com/about-the-hotel/history-of-hotel-en.html)

The famous Casey’s Cupcakes owned by the Cupcake Queen, Casey Reinhardt! Casey’s stepfather Duane Roberts is dubbed as “as the man who saved Riverside’s historic Mission Inn”. He is also the inventor of the frozen burrito. 😉 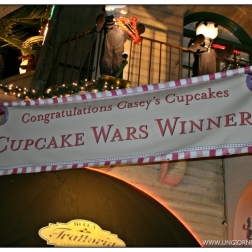 So many peeps here!

Posing with the girly tree! 😀

This was after the lights had been turned off because it was closing time already. 😦 Boo! Hahahaha! 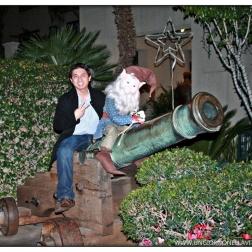 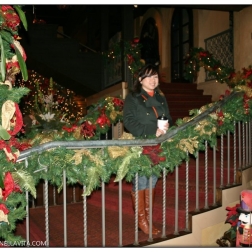 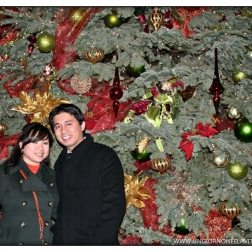 Gotta have a photo with the Christmas tree! 😀

Until next time! Wait, that’s in a couple of hours! Wohoo! I’m super excited! 😀

Here are some interesting facts about the Mission Inn Hotel & Spa per Wikipedia:

For 125 years the Mission Inn has been the center of Riverside, host to a number of seasonal and holiday functions, as well as occasional political functions and other major social gatherings. Pat and Richard Nixon were married at one of the two wedding chapels, Nancy andRonald Reagan honeymooned there, and eight other US Presidents have visited the Inn: Benjamin Harrison, William McKinley, Theodore Roosevelt, William Howard Taft, Herbert Hoover, John Fitzgerald Kennedy, Gerald Ford, and George W. Bush.

The Inn continues to be a getaway for notable individuals to this day. Arnold Schwarzenegger has stayed there during his tenure as Governor of California and the Osbourneshave also paid a visit in the past few years.

American author Anne Rice so enjoyed the Inn she incorporated it into her 2009 book Angel Time. The book is the first in Rice’s Songs of the Seraphim series, which tells the story of Toby O’Dare, an assassin with a tragic past, who uses the Mission Inn as his refuge.

The Inn’s unique architecture and ambiance have attracted many film makers. Film shoots at the Inn include 1938’s Idiot’s Delight with Clark Gable, 1969’s Tell Them Willie Boy Is Here with Robert Redford, Billy Wilder‘s 1981 comedy Buddy Buddy with Jack Lemmon and Walter Matthau, 1988’s Vibes with Jeff Goldblum, 1977’s Black Samurai with Jim Kelly, and 1998’s The Man in the Iron Mask with Leonardo DiCaprio.

Eddie Money filmed the music video of “Think I’m In Love” at the Inn.

The Sliders season 3 episodes 16 and 17 (“Exodus”, parts I and II) were shot extensively in the Mission Inn, which played as a military base.

Of its seasonal functions, the Festival of Lights is well known for its nearly three million Christmas lights, and over 400 animated figures. Although the Festival lasts all throughout the holiday season, the day after Thanksgiving is the lighting ceremony. On this day city officials and the owner of the hotel, Duane Roberts, give speeches before fireworks light up the sky and nearly 65,000 people attend annually to view the unique hotel and its holiday decorations. During the festival of lights, decorations including musical angels, carolers on the balconies, and a Santa Claus climbing the chimney are featured.

The hotel is rumored to be haunted because of alleged paranormal activity. Each year before Halloween the hotel participates withGhost Walk Riverside, a fundraiser for the California Riverside Ballet. The Othersiders featured the hotel in a 2009 episode.

You can learn more about Mission Inn’s history here. 🙂