While on our quick stop at Solvang (see previous post here), we called in ahead of time to make reservations for the tour at Hearst Castle. We were able to make reservations for the Grand Rooms Tour which is about 45 minutes and it will give you access to the Assembly Room, Refectory, Billiard Room, Theater, The Gardens, Neptune Pool and the Roman Pool. You will also get the chance to watch a short film entitled “Hearst Castle – Building the Dream” which is exclusively for the Hearst Castle Theater.  Hearst Castle or “La Cuesta Encantada” (“The Enchanted Hill”) as it is formally called by its former owner, newspaper magnate William Randolph Hearst, is a National and California Historical Mansion located in the city of San Simeon in California’s Central Coast. It is a beautiful Mediterranean style mansion on a hill overlooking the Pacific Ocean. It was designed by architect Julia Morgan between 1919 and 1947. The owner was originally going for a Japanese or Korean theme exterior but eventually went for what’s popular at the time, the Spanish Revival just like the Balboa Park in San Diego where the architect modeled Hearst Castle from. We really enjoyed the tour and I’d say my favorites are the Neptune Pool and Roman Pool. Both pools are just really extraordinary and you can’t not love it! 🙂 We’d like to go back there and do the evening tour next time as you get to see more of the castle for the price of one tour ;). Here are some photos from our very first castle visit :). 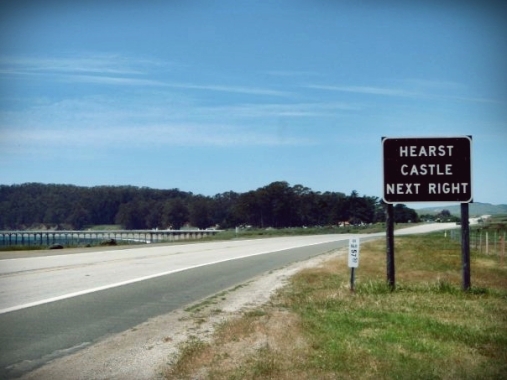 In 1865, George Hearst purchased 40,000-acres of ranchland that included the Mexican Ranchos of Piedras Blancas, San Simeon and Santa Rosa. In 1919, his only son, William Randolph Hearst, inherited the land from his mother, Phoebe Apperson Hearst. By then the ranch had grown to encompass 250,000 acres. (hearstcastle.org) 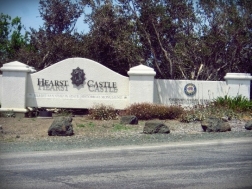 Originally known as “Camp Hill,” its wilderness offered a place for family members and friends to “rough it” on camping trips, but Hearst envisioned more comfortable accommodations. His simple instructions to famed San Francisco architect Julia Morgan in 1919: “Miss Morgan, we are tired of camping out in the open at the ranch in San Simeon and I would like to build a little something.” (hearstcastle.org) 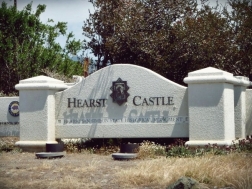 Hearst renamed the hilltop on which his beloved house rested “La Cuesta Encantada” – The Enchanted Hill. By 1947, Hearst and Morgan had created an estate of 165 rooms and 127 acres of gardens, terraces, pools and walkways, setting the stage for an American Castle that was destined to become one of the world’s greatest showplaces. (hearstcastle.org) 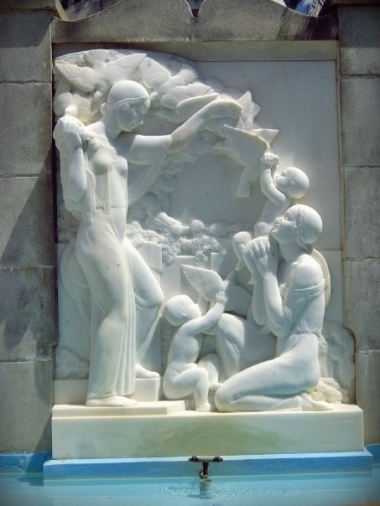 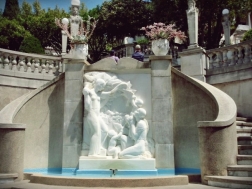 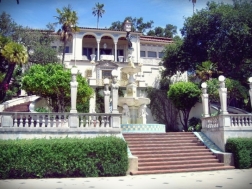 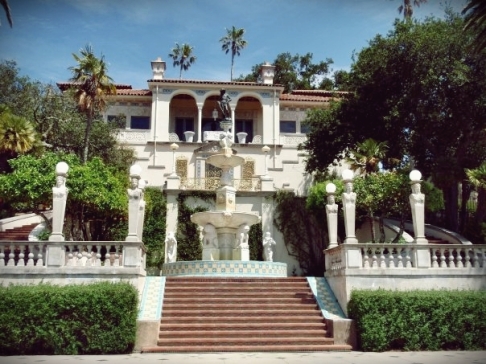 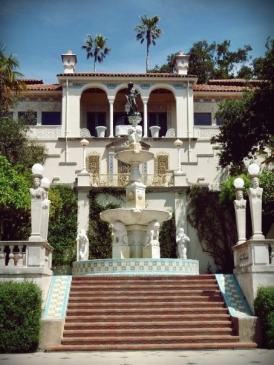 The Hearst Corporation donated the property to the state of California in 1957. Since that time it has been maintained as a state historic park where the estate, and its considerable collection of art and antiques, is open for public tours. Despite its location far from any urban center, the site attracts about one million visitors per year. (Wikipedia) 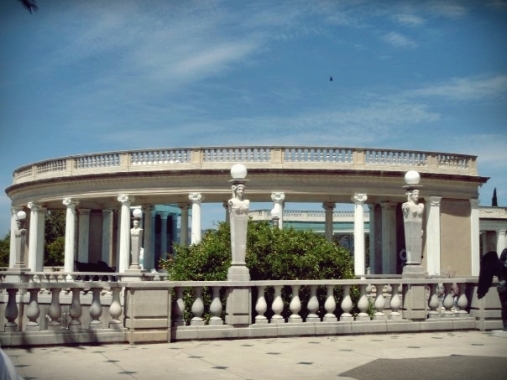 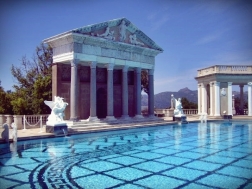 THE NEPTUNE POOL. Construction for the first of two Hearst Castle pools, the Neptune Pool, spanned 1924-1936. Three swimming pools were built on this site, each successively larger. Initial plans for the site called for a “Temple Garden” with an ornamental pool and temple structure. On March 31, 1924, W.R. Hearst wrote in a letter to Julia Morgan, “I am sending back the plan of the temple garden with the suggestion that we make the pool longer than it is, as long as a swimming pool. Mrs. Hearst and the children are extremely anxious to have a swimming pool!” On June 17, 1924, Morgan wrote that the first swimming pool was nearing completion: “Mr. Neptune and the two ladies can be placed but the finished basins will take some time yet.” (hearstcastle.org)

The second version of the pool, a substantial enlargement, was created in 1926-1927. This version had a series of concrete steps at the southern side called the Cascade, down which water flowed. The Neptune and Nereid statues, presently in the temple pediment, then stood at the top of the Cascade. The dressing rooms were begun in 1928 and furnished according to Hearst’s instruction. (hearstcastle.org) 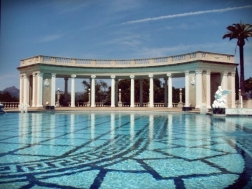 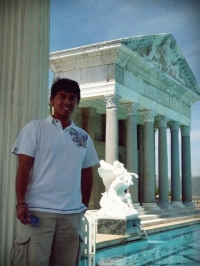 The present version of the pool was under construction from 1934-1936. It is unlikely that the enlargement was done to make it closer to Olympic size, as has sometimes been conjectured; Olympic pools are 165 feet long. It is more likely that the colonnades and Cassou statues, which were planned from the late 1920′s, required an enlarged treatment. Morgan anticipated further modifications of the pool for Cassou’s Neptune statuary group to be placed in the small upper pool. On July 27, 1936, Morgan wrote in a letter to Charles Cassou, “enclosed is a plan and some photographs of the ‘Neptune Pool’ in its present (uncompleted) state. The recess of the main pool and the small pool above to receive your ‘Neptune’ group I have not touched since my visit with you last year – so please do not think of them except as something yet to be done to form a proper background and sitting for your ‘Venus’ as well as your ‘Neptune’ statuary.” The “Neptune” sculpture group by Cassou intended for the small upper pool was never installed. (hearstcastle.org) 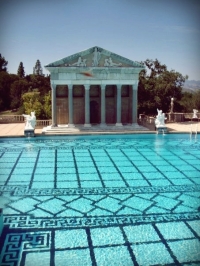 The final version of the pool as it stands at the Castle today is 104 feet long, 58 feet wide and 95 feet wide at alcove. It is 3.5 feet deep at the west end, 10 feet at drains and holds 345,000 gallons of water. Other unique aspects of the Neptune Pool include the oil burning heating system, the light-veined Vermont marble decorating the pools and colonnades, and four 17-century Italian bas-reliefs on the sides of the colonnades. (hearstcastle.org) 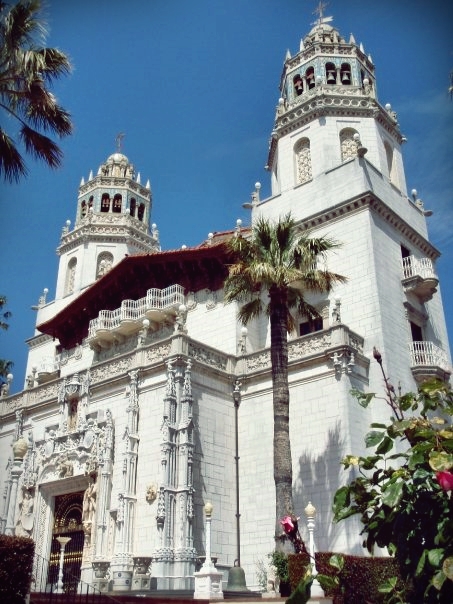 The Casa Grande is the 60,645 square-foot centerpiece of Hearst Castle. (Wikipedia) 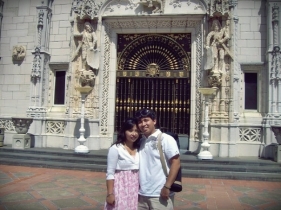 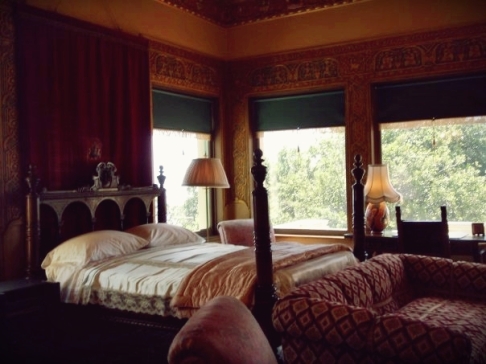 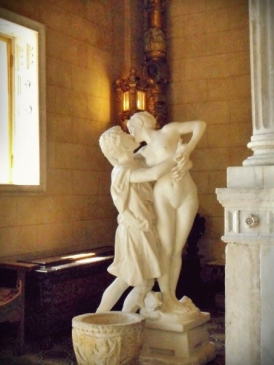 THE REFECTORY. Mr. Hearst and architect Julia Morgan named the dining room after the term for a monastery dining hall. Its high windows, bright silk banners, and gleaming silver candlesticks convey the atmosphere of a church from the middle age. But, the mustard and ketchup bottles show that Mr. Hearst liked to keep things informal at the ranch. (hearstcastle.org) 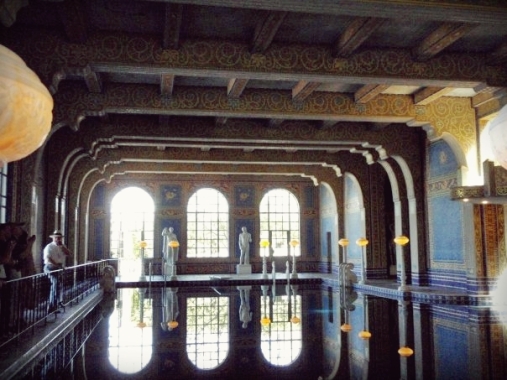 THE ROMAN POOL. The Roman Pool at Hearst Castle is a tiled indoor pool decorated with eight statues of Roman gods, goddesses and heroes. The pool appears to be styled after an ancient Roman bath such as the Baths of Caracalla in Rome c. 211-17 CE. The mosaic tiled patterns were inspired by mosaics found in the 5th Century Mausoleum of Galla Placidia in Ravenna, Italy. They are also representative of traditional marine monster themes that can be found in ancient Roman baths. The statues are rough copies of ancient Greek and Roman statues. One such copy represents the “Apoxyomenos.” Statuary was used on a considerable scale in the Baths of Caracalla. (hearstcastle.org)

The pool and surrounding room, which were built from 1927-1934, can be compared to an ancient Roman bath. The pool, like the baths, is located indoors. Its water was heated as in a tepidarium. However, in Hearst’s complex there were no hot or cold baths as there were in the ancient complex. The Roman Pool complex was designed to contain an exercise room, sweat baths, a handball court and dressing rooms. (hearstcastle.org) 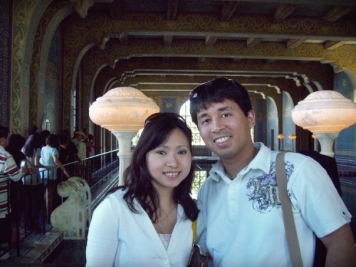 The Roman Pool is decorated from ceiling to floor with 1″ square mosaic tiles. These glass tiles, called smalti, are either colored (mainly blue or orange) or are clear with fused gold inside. The intense colors and shimmering gold of the tiles combine to create a breathtaking effect. The designs created by the tiles were developed by muralist Camille Solon. The inspiration for some of these designs came from the 5th Century Mausoleum of Galla Placidia. (hearstcastle.org)

Hearst was affected by the beauty of the mosaics in the mausoleum and incorporated similar styles into his Roman Pool. The walls of the mausoleum are marble but the vaulted arches are composed of blue and gold smalti. The roofs and dome are covered with mosaics of night blue, powdered with stars. The Roman Pool is similar to the mausoleum with its blue and gold color scheme and stylized star patterns. It differs because marble was only used in the statues, not on the walls, and there are no religious murals. (hearstcastle.org) 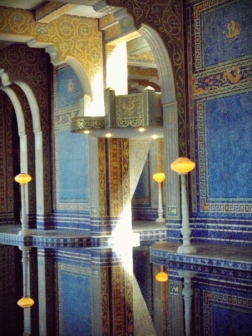 Decorating the Roman Pool are eight marble statues. These statues were carved starting in 1930 by Carlo Freter working in Pietrasanta, Italy. They are rough copies of ancient Greek and Roman statues. The statue of “Apoxyomenos” is found near the east side of the building. “Apoxyomenos,” also known as “The Scraper,” is a statue of an athlete scraping dirt and moisture off the underside of his right arm. The original bronze statue was created by the Greek sculptor Lysippos c. 320 B.C.E. Because Lysippos’ work does not survive, Freter worked from an ancient Roman copy of “The Scraper” found in the Vatican museum in Rome. Freter faithfully copied the Roman copy but also completes the statue with the addition of the missing strigil (scraper) and the missing fingers of the outstretched hand. (hearstcastle.org) 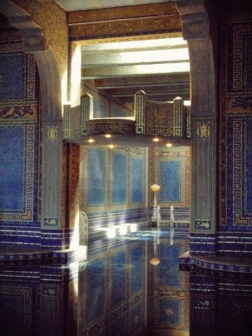 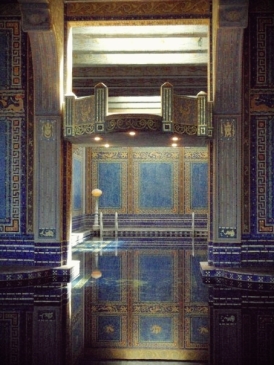