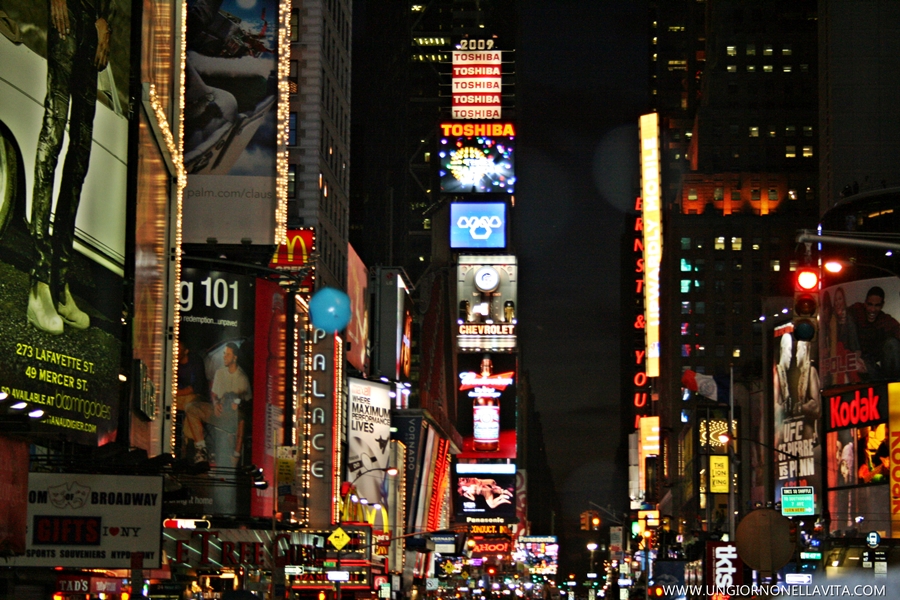 Spending New Year’s eve in Time Square has always been in my bucket list. I remember watching the ball drop on TV years ago when I was younger. I’ve always wondered how it felt like being there with all those people who looks so happy and ecstatic despite the freezing temperature. I wanted to be one of those people. I wanted to be a part of that crowd. Yes, I know it’s crazy because it’s definitely not fun to be standing out in the cold for hours just to watch some fancy ball drop while counting down the hours, minutes and seconds to welcome the New Year but my crazy self and my equally crazy better half “almost” crossed the Time Square New Year’s Eve experience in our bucket list when we braved the freezing cold temperature with 44MPH wind gusts 6 years ago. I remember my Mom and Dad calling us crazy for insisting to go but my Dad drove us to the train station that snowy New Year’s eve morning anyway :D. We were so excited that we didn’t mind wearing 5 layers of clothing and the possibility of getting stuck in New York because the weather didn’t faze us. We were two determined Southern California residents who wanted an experience of a lifetime. At least for us it was an experience of a lifetime. I really think everyone should experience it at least once. 😉

So our day started out really early. We were up around 5AM to get ready to head out by 7AM. My hubby and I wanted to explore the city first before heading to Time Square at 3PM. The train ride from New Haven, CT took two hours. We arrived in New York just before 11AM. It was snowing almost the entire time though it stopped for a bit when we just arrived in the city but continued throughout the day and finally stopped just before we headed to Time Square for the event. Being the tourists that we were, we made sure that we took lots of photos at every familiar spot. We’ve been to New York before with family but that was during the summer and it was both our first time visiting the city in winter so we wanted to savor the moment and have mementos of it. 😉

Prior to the event, we roamed around the city to check out some places we’ve always wanted to see. We wanted to go to Central Park and decided to take a walk instead of taking a cab. We made stops in between to check out some notable places in the city and of course took photos :D. Then as soon as we got to Central Park it started snowing. We didn’t care and continued our leisurely stroll in the park anyway. 😀 The snow eventually stopped and we were glad that it did. 😀

After Central Park we headed to Serendipity 3 only to get disappointed because there was a long line and we didn’t have any reservation which was required. This place is in our NYC bucket list because Serendipity is one of our all time favorite movies and there was a scene in the movie where John (John Cusack) and Sara (Kate Beckinsale) were enjoying each other’s company while having some yummylicious dessert. We pictured ourselves doing the same thing 😀 but unfortunately that day wasn’t THE day! Hehehehe! We took our souvenir photo anyway and next time we will make sure that the photo is taken inside this sweet little place. 😉 Shortly after that we decided to grab lunch since we were both hungry and had two hours left before we head to Time Square for the New Year’s eve countdown.

Upon arrival at Time Square we noticed that there were fences setup on the street which served as a divider between crowds.  There’s a designated area for the event and once you’re in, you’re in! So going to the restroom is a MUST beforehand because if you leave, you’ll lose your spot and you might end up somewhere where you can’t really see much of what’s going on. We were there by 3:30PM, half an hour after they started letting people in the area. We ended up on the third block which was a really great spot. 😀 All was fine and dandy until 3 hours later when I started shivering and the wind kept getting stronger. I wasn’t sure how much longer I can take the freezing cold temperature. My cheeks felt so puffy and swollen. I started to have a runny nose and the tip of it felt SO cold and a little numb. I braved it for another half an hour and finally gave up. I was disappointed at myself and I felt bad for my hubby because I know how much he wanted to experience the whole thing. We left and went inside a restaurant about a block away from our awesome spot. We ended up eating dinner there and was going to go back but changed our minds because it got even colder due to the strong wind. We were bummed out but made the most of it by walking around the city and checking out some spots we missed in the day because we didn’t have enough time. We watched people ice skate at The Rink at Rockefeller Center, admired the beautiful window displays at Macy’s and spent a good amount of time at Waldorf Astoria just people watching, listening to some holiday classics being played in the piano on the cocktail terrace of the lobby and most importantly staying warm :D. After our detour at Waldorf Astoria, we then headed to the train station in hopes that we could go home early just in time for midnight. While waiting to board the train, we met a lady who was also in Time Square earlier but decided to leave because she could no longer stand the freezing cold temperature. We were exhausted and were falling asleep while waiting for our ride. I looked around and thought to myself, “I don’t want to welcome the New Year here! We need to be somewhere with lots of happy and joyous people who are ecstatic to welcome the coming year!” Long story short, my hubby and I ended up at Annie Moore’s, a bar and restaurant near the station and welcomed the New Year with our puffy and swollen cheeks, runny nose but a smile in our faces 😉 :D. We were bummed that we missed the ball drop in Time Square but at least we weren’t too far away that we still got to enjoy the festivities, saw the countdown on TV while staying warm with a free champagne toast courtesy of the bar plus I also got to enjoy some Midori sour ;-).

On the train ride home, we said that we would never go back to Time Square for New Year’s eve again even though we missed the ball drop but recently we’ve been talking about giving it another shot in hopes that the weather is much more bearable next time so that we can fully enjoy the whole Time Square New Year’s Eve experience. 😀

Here are some photos from our freezing but fun New Year’s eve at the Big Apple. 😀

On board the train to New York.

On board the train to New York.

Hello NYC! We have arrived! 😀

Photo op with the beautiful Christmas tree at the New York Palace Hotel. 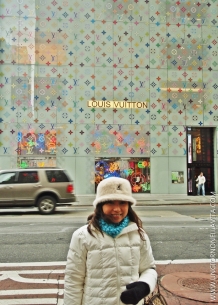 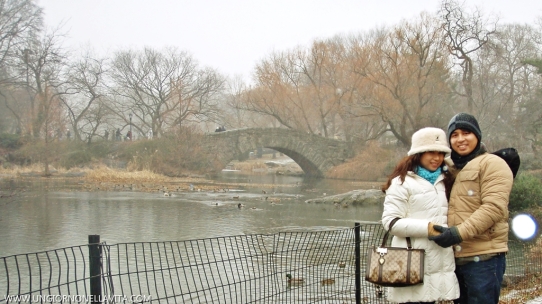 Gapstow Bridge in the background.
A schist bridge crossing The Pond, its first iteration was designed by Jacob Wrey Mould in 1874. The bridge was a wooden bridge with intricate cast iron railings. Due to excessive tear and wear, it was replaced by the present simple stone structure in 1896, by Howard & Caudwell. Gapstow stands 12 feet high, spans 44 feet of water, and stretches 76 feet in its full length. (Wikipedia) 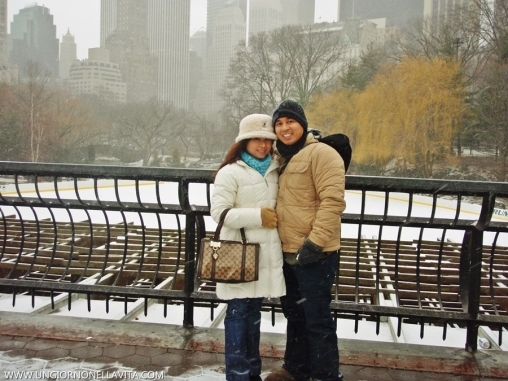 The Wollman Rink.
Wollman Rink is a public ice rink in the southern part of Central Park, Manhattan, New York City. The rink was opened in 1949 with funds donated by Kate Wollman (December 5, 1869 – October 15, 1955) who donated $600,000 for the rink to commemorate her entire family from Leavenworth, Kansas. Historically, the rink has been open for ice skating from October to April and in the summer seasons is transformed into a venue for other purposes. The rink had for many years been the venue for a series of outdoor summer rock concerts. The first summer music festival at the rink opened on July 1, 1966 and was sponsored by Rheingold Beer. The Rheingold Central Park Music Festival also took place during the summer of 1967. The next summer, Schaefer Beer took over sponsorship. The first annual Schaefer Music Festival opened on June 27, 1968 and continued each summer through the summer of 1976. The following summer, Dr Pepper became the sponsor, and the first Dr Pepper Music Festival opened on July 6, 1977 and ran annually through the summer of 1980. The concert series subsequently moved to a pier on the west side of Manhattan. Wollman Rink no longer hosts concerts, but in the summer it contains the Victorian Gardens Amusement Park. Wollman Rink has been featured in several movies, including Love Story and Serendipity. (Wikipedia)

One of my favorite photos from taken at Central Park. ❤

In the background is the majestic, gilded-bronze equestrian group statue which depicts one of the United States’ best-known generals, William Tecumseh Sherman (1820 – 1891). Dedicated in 1903, it was master sculptor Augustus Saint-Gaudens’s (1848 – 1907) last major work, and serves as the centerpiece of Manhattan’s Grand Army Plaza. (http://www.nycgovparks.org/parks/grand-army-plaza-m062/monuments/1442) 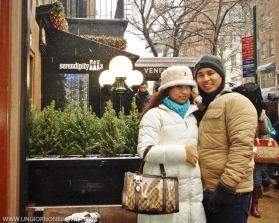 At Serendipity 3 located at 60th St. We’re coming for you Serendipity! 😉

At Time Square.
We were early birds on the 3rd block! 😀 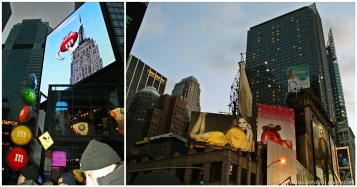 Channeling my inner “ninja”! Hehehehe! It was sooo cold! Brrr! 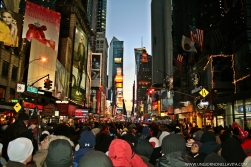 Sooo many peeps at Time Square for New Year’s Eve!

This is it! I gave up because it got waaay too cold! It was 22F with wind gusts of 44MPH.

The Rink at Rockefeller Center. 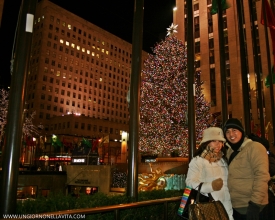 People watching at The Rink at Rockefeller Center.

The Rink at Rockefeller Center.

Christmas Angels at the Rockefeller Center.

The Cathedral of St. Patrick (commonly called St. Patrick’s Cathedral) is a decorated Neo-Gothic-style Roman Catholic cathedral church in the United States and a prominent landmark of New York City. It is the seat of the archbishop of the Roman Catholic Archdiocese of New York, and a parish church, located on the east side of Fifth Avenue between 50th and 51st Streets in midtown Manhattan, New York City, New York, directly across the street from Rockefeller Center and specifically facing the Atlas statue. (Wikipedia) 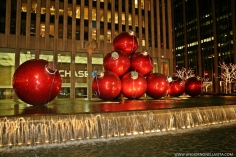 We LOVE this hotel!

Thank you Annie Moore’s for the free champagne toast and the yummy Midori sour! 😀

Until next time New York! It’s been “freezing” fun! 😀

4 thoughts on “Ringing in the New Year at Time Square…Almost!”