Traveling to another country and barely speaking their language can be fun and frustrating at the same time. Though there are many useful translator apps nowadays that comes in handy especially when traveling, it doesn’t always help you when you need it the most. I, for one can attest to that because of my experience from my most recent trip to Japan.

When my fiance and I were getting lost in Kashiwa a couple of months ago, I didn’t worry too much about the language barrier until we ended up at a restaurant where they didn’t have photos of the food. Eating lunch that day wasn’t a problem because we just pointed out what food we wanted to order. I tried to practice what’s left of what I learned when I took Japanese lessons from 11 years ago and it helped just a little bit. Come dinner time was a completely different story. We saw this ramen place between Marui and Takashimaya Mall and we were quite intrigued by it so we decided to check it out. Well, well, we were quite surprised when we got inside! It was something we totally did not expect! You literally get to choose what you want to put in your ramen. It reminded me a little of the Mongolian fast food at the malls in America. So, my fiance and I were looking at each other in a funny way then he says, “Are you sure you want to eat here?” and I confidently said, “Of course!”, only to back out a minute later! Hahahaha! In short, I chickened out because I was totally intimidated! I failed! 😀 I know the people at the restaurant were looking at me weird as I walked away but I seriously couldn’t talk when it was my turn to order my food. My fiance couldn’t say anything either! It was hilarious and we couldn’t stop laughing as we both walked away from the restaurant to look for another place to eat at. Good thing we found another restaurant nearby and we were excited because there was a sign that says “English Menu”. Just to make sure, we asked the guy who was doing some street marketing for the restaurant and although he didn’t spoke English and nor did we spoke Japanese, we still understood each other with the phrase, “English Menu?” Hahahaha! He nodded to us with a smile, said “Hai!” and walked us upstairs leading to the restaurant on the second floor of the building. We didn’t have to wait long and somebody seated us within minutes. We really liked the ambiance of the restaurant and it provided privacy as it had small covered booths. We were quite excited especially after the waitress confirmed that they have an English menu but it’s on a tablet and she was going to get it for us. She did hand us the traditional menu though so we had the chance to look at it but we were disappointed to see only a single photo of food in the entire menu. We were famished already and my sugar level has dropped so I needed to eat something ASAP before I pass out! After a few minutes the waitress comes back only to break our hearts with the news that the only tablet they have with the English menu is having some technical issues! Seriously??? I wanted to cry but I had to pull myself together! I was determined to eat some ramen and no, McDonald’s is not an option as my fiance suggested to go there after two failed attempts at having a decent meal for dinner. I couldn’t think straight anymore because of hunger, so we decided that we are going to eat at the next restaurant we see. It doesn’t matter what they are serving as long as it’s edible and with the exception of some really exotic foods. I love food and trying out different cuisines but I am certainly not a Fear Factor material. 😀 Luckily there was a fast food across the street that’s open 24 hours and so we headed there. We immediately forgot our frustration as we were quite entertained with the ramen vending machine. 😀 It was my fiance’s first time seeing one of those so he was very excited about it! 😀 We successfully picked out our food from the vending machine outside the ramen place even though there were no English translations. Thanks to the slideshow display in the vending machine that shows the photo of the food, otherwise we would probably end up eating at McDonald’s or picking up food at Donki! Donki or Don Quijote is a discount chain store that has over 160 locations throughout Japan and they carry a wide range of products, from basic groceries to electronics to clothing. Donki was actually our favorite hangout place while staying in Kashiwa. We really enjoyed perusing the store. 😀

We sure had a lot of laughs that day. It was a total fail but definitely hilarious. On the second thought, maybe I shouldn’t say total fail because in the end we still ended up with a delicious meal and surely an experience that we will never forget. After all, traveling is about getting lost (including lost in translation 😀 ) while learning and having fun at the same time. 😀 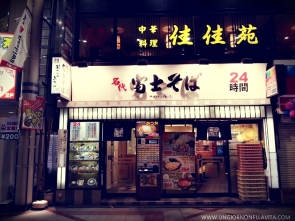 I love those sampuru (fake foods)! 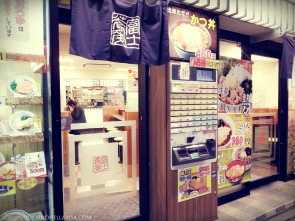 The coolest vending machine EVER!!! 😉 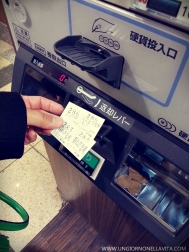 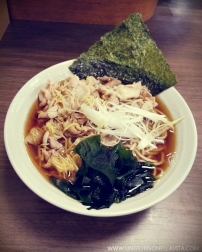 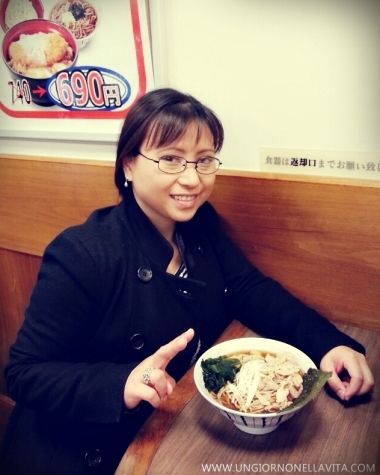 Someone’s happy despite the heavy bags under her eyes due to lack of sleep because of too much excitement from traveling! 😀

My ever patient partner in crime! 😀

3 thoughts on “When all else fails, use a vending machine!”